Once every year during the months of November and December, Northern Italians prepare to celebrate Christmas. Famous winter holiday sweets, cherished and gifted throughout the northern regions besides Panettone, Pandoro and Croccante include: TORRONE and MANDORLATO. 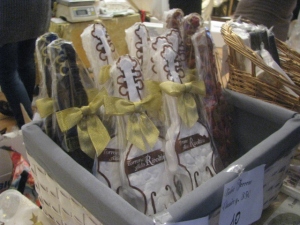 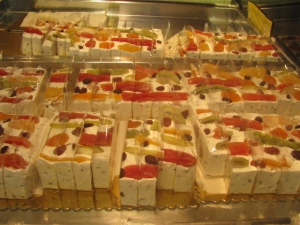 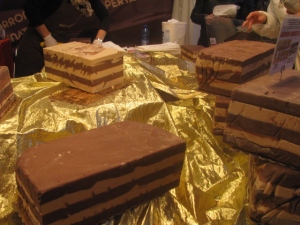 Legend has it that a first tall square tick bar of firm candy compound, made in Lombardy’s Cremona and called torrone, was prepared in 1441. It was to celebrate the wedding of the Italian Condottiero (Army Commander) Francesco Sforza to Bianca Maria Visconti, Duchess of Milan, daughter of the Lord of Milan. Cremona’s medieval Torrazzo tower, built by the original lords of the city and gifted to Bianca Maria by her father Filippo Maria Visconti together with the whole city and surrounding area, were the torrone’s shape inspiration. 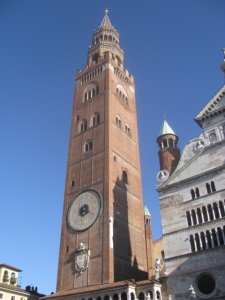 According to a more international culinary history, candy bars prepared like the Northern Italian torrone and mandorlato, with egg whites, honey and toasted nuts, were already known to the ancient Romans and Arabs.  In fact, a type of sweet candy called TURRON became especially entrenched in European candy making tradition after the Arabs introduced Mediterranean countries to almonds and sugar cane.
To enjoy these ancient sweets, over eight days of festival, from November 15th to November 23rd, 2014, the home city of famous violin makers Amati, Guarneri and Stradivari, where every year also a world wide music instruments market takes place, is celebrating a FESTA DEL TORRONE DI CREMONA. With parades, colored costumes, flag waving, drum beating, singing, sampling medieval and modern foods and pairing wine or beer to torrone, the festival will attract thousand of Italians and foreign visitors. Also bloggers have gathered this year to see how, who, and where to best praise the ancient sweet and the perfect place for a sweet tooth. 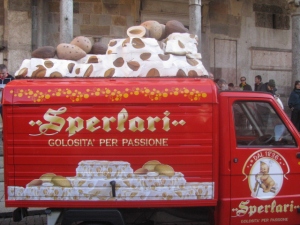 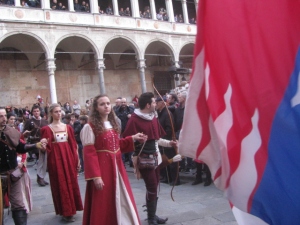 Built over an ancient Roman fort site around 218 BC, ancient Cremona became especially important during medieval times first as a free “Comune” and later as the extension of the Visconti’s economical and political power. To show power and importance, as many city states did during those times, Cremona built in 1267 a 110 meter tall brick tower. Surrounded by fertile land, and not far from the river Po, the city became a hub for merchants moving throughout the Po Basin area from the northern to the southern Italian regions along the Appia and from the western to the eastern regions of Northern Italy along the Postumia road.
To taste every day food in Cremona, besides dishes offered at the festival, you might want to try Cremona’s Ristorante La POSTUMIA, Via Buoso da dovara, 106 – either by calling and booking at (Europe + Italy + ) 0372-430862 or by emailing: info@lapostumia.it after having chosen a time and a possible menu by accessing the restaurant’s website at http://www.lapostumia.it – The restaurant is usually closed on Sundays. Regional specialties of the house include: Marubini Cremonesi in Brodo (Cremona Style Pasta Pockets in Meat Broth), Dadonata di Zucca (Pan Fried Cubed Pumpkin), Mousse di Semifreddo di Torrone Cremonese con Salsa di Cioccolata (Iced Torrone Dessert with Chocolate Sauce).

HOW TO PEEL HAZELNUTS AND ALMONDS ALSO CALLED NOCCIOLE E MANDORLE
In a suitable sauce pan, cover the unpeeled almonds (or hazelnuts) with enough water. Bring the nuts and the water to a rolling boil. When the water boils turn off the heat and let the nuts rest in the water for a few minutes. By hand, squeezing the peel off the nuts, remove each peel. 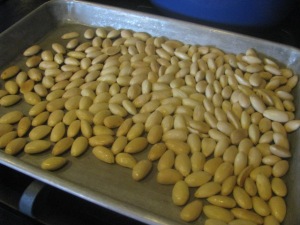 Peeled Almonds Ready to Be Toasted

Whole Hazelnuts in their Shells

HOME MADE CHOCOLATE FLAVORED TORRONE WITH HAZELNUTS AND ALMONDS, also called TORRONE AL CIOCCOLATO CON NOCCIOLE E MANDORLE
This recipe’s torrone will turn out almost hard. The tricky part of making it will be the candy’s temperature and the time to which the honey-sugar-corn syrup mixture will be exposed to beating once all ingredients are mixed. This recipe makes about 25 pieces cut from one 8 x 8 inches bar.

Making torrone might not be for a very inexperienced beginner.

Ingredients you will need:
Enough or at least 275 g (about 10 oz.) peeled, toasted hazelnuts and almonds (toasted at 350 F  or 180 C for about 10 minutes with the heat turned off after the buzzer rings and the nuts kept in the warm oven until they are ready to be used)
275 g (about 10 oz.) granulated sugar
275 g (about 10 oz.) honey
1 Tbsp water
25 g (about 1 oz) corn syrup
2 egg whites beaten to a soft peak
½ cup confectioner’s sugar
½ cup Dutch processed cacao powder
1 tsp vanilla extract
Enough rice paper (about 3-4 large rectangular pieces)
Enough parchment paper to cover a half sheet pan
1 8 x 8 inch baking pan
1 spatula
A heavy duty mixer with a whipping and paddle attachment
A three quart saucepan

In a mixing bowl, combine granulated sugar, honey, corn syrup and water and stir. In a separate bowl, mix the cacao powder and the confectioner’s sugar. Prepare the baking pan by lining it with parchment paper. Place two sheets of rice paper next to each other on top of the paper (you may have to cut the paper). Pour the sweet mixture into the saucepan. Add a candy thermometer and bring the mixture to a gentle boil. Occasionally with a pastry brush dipped in water wipe down the sugar that bubbles up the sides of the saucepan.  Let the mixture reach 320 degrees Fahrenheit. While the sugar mixture reaches the desired temperature, beat the egg whites to a soft peak and add the cacao powder and confectioner’s sugar. Beat all ingredients until all is well combined. Remove the hot candy mass from the source of heat as soon as the mixture has reached 320 degrees. Let it cool to 300 degrees and add to it while still warm the egg-sugar-egg white mixture and using the whipping attachment beat the torrone mixture for 6 minutes.
After those 6 minutes, the mixture should be glossy and leaving tracks in the candy while it is still in the mixer. Change the whipping attachment to a paddle and add the vanilla extract. Process the torrone for six more minutes. When the mixer is straining and the torrone is somewhat firm, add the warm nuts kept warm and stir by hand. At this point, spoon the torrone mass into the prepared pan and spread it over the rice paper.

Cover the firm layer of torrone with rice paper (you may have to cut the paper) and flatten it so that it is about 1 – 1 ½ inches high. This time, cover the torrone with parchment paper and with a heavy flat object press down the torrone evenly. As soon as the torrone has cooled off cut it into squares. You may wrap later each piece individually and for up three weeks store the pieces in a cool, dry place.