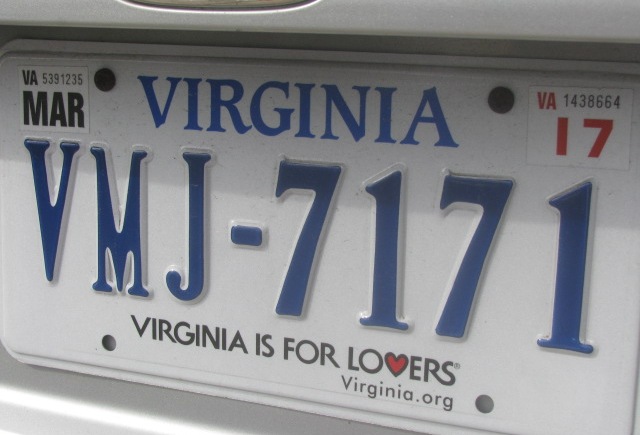 Virginia is for Lovers

Not all hurricanes leave only death and destruction; Norfolk’s ancient “Hurry Cane,” for example, in 1667, after 24 hours of rain, storm, wind, and flood water, “spawned and spit” a gift “for lovers”: a tongue of land called today Norfolk’s Willoughby Spit.
According to Hampton Road history and the Virginian Pilot newspaper (July 14th, 2013) and reports sent to the British Governor of Virginia William Berkeley (1605-1677) by Colonial Secretary Thomas Ludwell, Virginia’s sandy point of land, today home to many beach residents and Chesapeake Bay fishermen, appeared suddenly in the 17th century one morning when Sarah Willoughby discovered the “new property.” Immediately of course, the Willoughbys made sure to add the “new property”  to their original land which was registered in the Land Registry as being located south of today’s Norfolk’s Bay Bridge.
As time and centuries passed, the entire beach property of the Willoughbys, including the piece left behind by the terrible hurricane, was portioned, sold, resold, purchased, parceled, and passed on to new owners. In 1749 another hurricane arrived casting more sand and allowing more space for new inhabitants and new homes throughout Willoughby Spit. 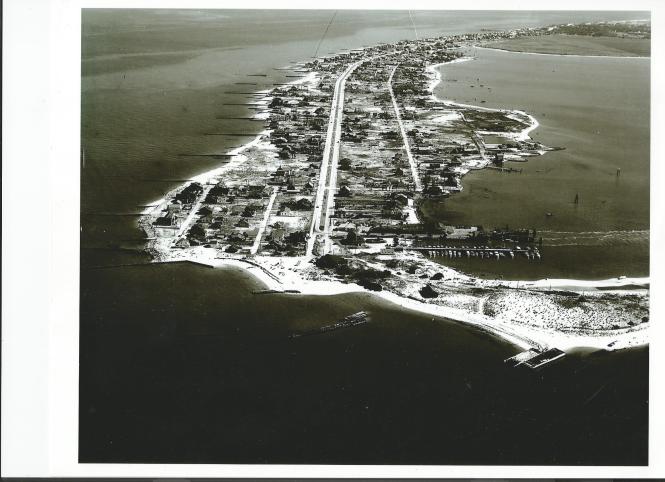 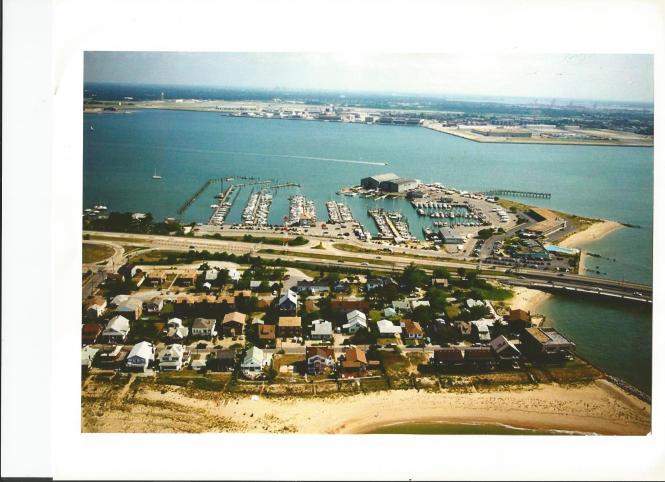 Several winters, summers, tides, and May moons passed since that first land addition of the Willoughbys; today Wiloughby Spit is a fine and tranquil week end and summer season spot for beach goers, boat owners, shell collectors, and sun worshipers.
With Chesapeake Bay’s crab and fish abundance, Norfolk’s Willoughby Spit gained beach resort fame and neighborhood charm. Biking around the area, visiting friends who a few years ago decided to gather periodically during the Willoughby Wobble, partying outdoors around pot lucks with smores, wieners on the stick, crab cakes, soft crab dishes, she crab soups and getting to know those who live next doors, or not far away, has become a wonderful way of living summer there. Participating in one of the two yearly Willoughby Wobbles, first put together by Dean Merrill in 2013, can open doors to new friends and to a feeling of being at home even if away from home. 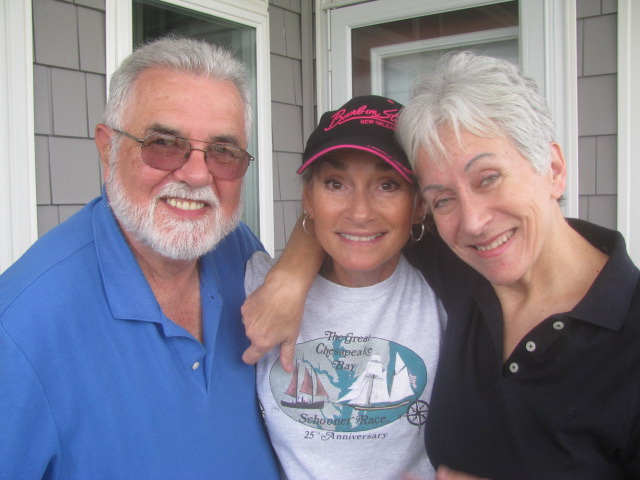 CARYN R’S EASY MEATBALL SUB CUPCAKES FOR THE WILLOUGHBY WOBBLE
This way of preparing “meatball” cupcakes is very American and very easy. Some ingredients are pre-made. The whole process is fairly fast and the cupcakes will be a great success as they are bite-size.
Makes 24 cupcakes ( for more cupcakes: multiply ingredient measurements).

Preheat the oven to 375 degrees Fahrenheit for 20 minutes. Spray with oil the insides of the muffin cups. Remove the canned dough, flatten it and roll it out and cut it into 24 squares. Press the squares into the muffin cups. In a mixing bowl, combine cream cheese, shredded mozzarella cheese and the Italian seasoning (or the dried oregano leaflets). Place at the bottom of each cup lined with dough a portion of cheese mixture and top each cheese portion with one meatball and some tomato sauce. Bake for about 15 minutes or until a toothpick comes out dry and the meatballs are done and soft.

ABOUT NORFOLK’S WILLOUGHBY WOBBLES
The first “Willoughby Wobble” came to be in 2013, when Dean Merrill, inspired by another Wobble which had taken place throughout his brother’s neighborhood, decided to set up the event for his own Willoughby Spit neighborhood. Drumming together friends and neighbors, Dean, a very personable and friendly beach spirit, publicized the get-together event with flyers paid out of his own pocket. The happening was a success. It turned out to be also a generous fundraiser for a friend who had been diagnosed with breast cancer.
Since then, year after year, the Wobble has taken place twice a year with locals who wish to show friendship and camaraderie. A simple implementation of the American way of welcoming everyone who is old, young and new to this almost hidden part of Norfolk.
During the Wobble, walking, “wobbling” holding a drink, or biking, friends and friends of friends or relatives of neighbors, have grown fond of moving from house to house open to the neighborhood party and to everyone who wants to belong to the community. Visiting those who welcome the participants with smiles, food and drinks has become an interesting and fun way to update on what’s new in the neighborhood, how “friends” are, on the locals’ latest joys and hobbies, hopes, aches and pains, dreams as well as professional endeavors. 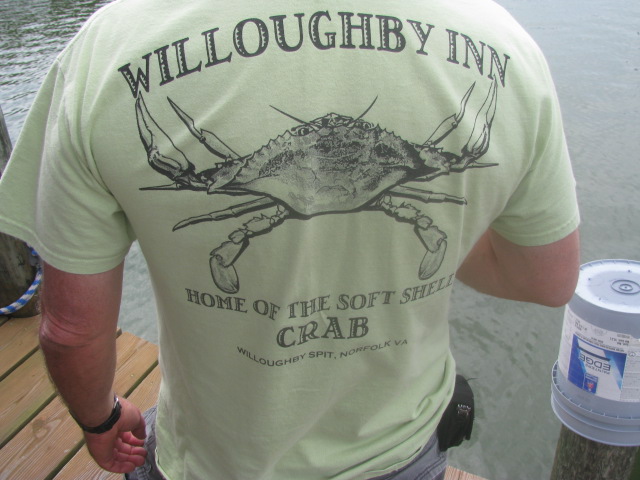 THE SEA CAPTAIN’S CHOCOLATE SMORES OR WHAT TO DO AROUND WILLOUGHBY WOBBLE’S OPEN FIRE WITH GRAHAM CRACKERS, MARSHMALLOWS, AND HERSHEY CHOCOLATE BARS – ACCORDING TO CAPTAIN STEVEN BRIGGS OF THE TUGANTINE NORFOLK REBEL

Take a long thin stick and spear the marshmallow. Stand near the open fire and roast the soft sugar pillow on the stick until it will be golden brown. Sandwich the roasted marshmallow between two Graham Crackers together with a bar of Hershey Milk Chocolate. 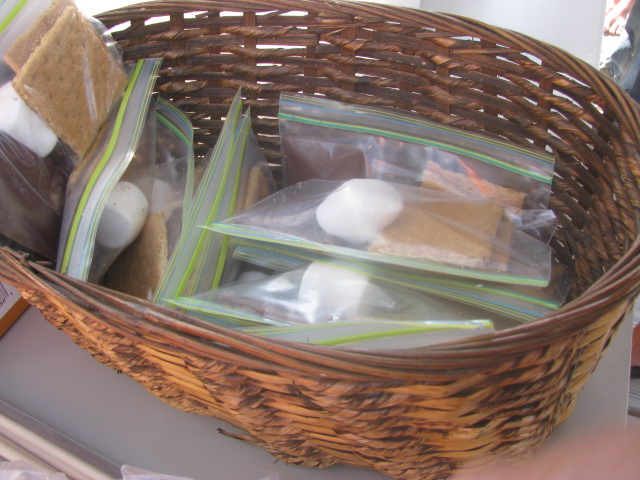 FOR INFORMATION ABOUT THE TUGANTINE NORFOLK REBEL AND OTHER BOATS IN NORFOLK – CONTACT: CAPTAIN STEVEN BRIGGS, 1553 Bayville Street
NORFOLK, VA 23503 – Tel 757 777 6080 or email:tugantine@yahoo.com or watch the Tugantine on https://www.youtube.com/watch?v=FNCcNZCm7lM or check out http://rebelmarina.com/

Chesapeake Blue Crabs (Callinectes sapidus) are native of the North American brackish estuaries and bays from Cape Cod to the Gulf of Mexico; however, they live in largest concentration throughout the Chesapeake and Delaware bays off of the states of Delaware, Maryland and Virginia. They are caught in cage traps or with dredging nets year-round but especially from April through October. Mid May through August, when crabs shed their hard outsides, they are a delicacy, prepared fried as a whole and called “soft shells.” They average 4 to 6 inches across; have shallow and compressed bodies which taper on each end. Male crabs, called Jimmies, have blue claws and females, called She Crabs, have orange tipped claws.

Crabs should be alive before cooking. Once cooked or steamed in their shells they will turn orange red. Cracked open, their body meat will be white while the claw meat will be darker almost golden brown. A safe method to check about their freshness and that they are alive: tap them lightly to see that the claws move. 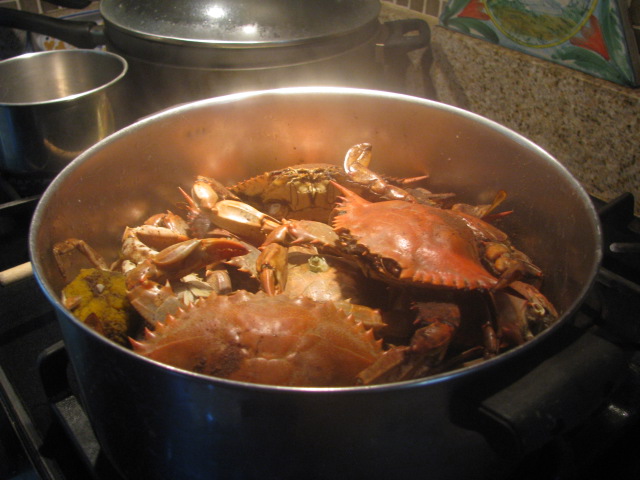 Combine all ingredients and mix gently. With a spoon, by hand make enough patties as there is meat. Heat the oil in a skillet and pan fry the crab cakes on both sides until golden brown. Serve with corn on the cob or steamed and buttered corn kernels.

A COOKBOOK FOR THOSE WHO WISH TO PREPARE CRABS AND OTHER CHESAPEAKE BAY SPECIALTIES:
CHESAPEAKE BAY COOKING WITH JOHN SHIELDS, 25th ANNIVERSARY EDITION, 2015 JOHN HOPKINS UNIVERSITY PRESS
This cookbook marks the culmination of John Shields’ career as an experienced and authentic Chesapeake Bay cuisine supporter and practitioner. It is a collection of recipes and pieces of Chesapeake Bay culture and history. 51 of the book’s 325 pages are dedicated to crabs. The recipes are easy to follow and work. There are directions on how to prepare crab soups, how to make Senator Barbara Mikulski’s “Spicy Bay Crab Cakes,” how to prepare Maryland and Virginia dishes, such as Neopol Smoked Rockfish Chowder from the Neopol Savory Smokery in Baltimore and the Smoked Country Ham and Blue Cheese Pie.